This page is archived as part of Mississippi State University's history. It may refer to situations which have changed or people who are no longer affiliated with the university.
Skip to main content 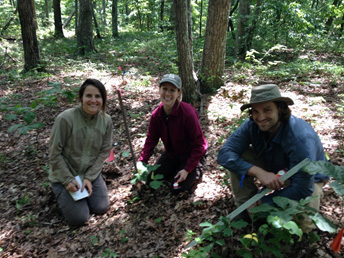 In the central hardwood and southern Appalachian regions of the eastern United States, fire suppression has led to oak (Quercus spp.) regeneration difficulties and a compositional shift towards more shade-tolerant, fire-sensitive species with the potential to modify ecosystem dynamics. Because oaks strongly influence nutrient cycling and forest hydrology and support numerous wildlife and pollinator species, oak conservation is essential and increasingly important to these regions.

Considerable evidence suggests reintroduction of fire can maintain upland oak ecosystems by removing competing species and increasing understory light. A number of studies are being conducted in collaboration with Bernheim Arboretum and Research Forest, located in Clermont, KY, with the overarching objective of better understanding oak and competing species regeneration in response to prescribed fire and canopy gap disturbances. Our working hypothesis is that multiple disturbances will promote oak regeneration and recruitment into the canopy by increasing light and minimizing competition. Our findings will determine how multiple disturbances can preserve upland oak ecosystems and determine future upland oak dynamics. 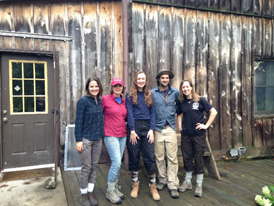 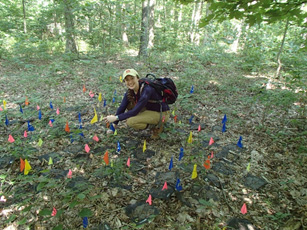 Upland oak stands across the eastern United States are experiencing a compositional shift as oaks (shade-intolerant, fire-tolerant species) are being replaced by mesophytes (shade-tolerant, fire-sensitive species). Without fire as a disturbance in upland oak ecosystems, mesophytic species, such as red maple and sugar maple, are able to establish in upland oak territory and may create moist, cooler conditions in their understory, a hypothesized process called mesophication.

Although mesophication has become a wide-spread and seemingly well documented phenomenon, the mechanisms by which mesophytes act to suppress fire have been relatively unstudied. This fact, combined with management practices that use prescribed fire to restore upland oak ecosystems, brings us to the question: What impacts do mesophytes and oaks have on their understory conditions, and are conditions under a mesophyte canopy less flammable than under oak?

We hypothesize mesophytes will have higher leaf area, and greater crown area and volume, leading to lower light levels, cooler air temperatures, and higher fuel moisture beneath their canopies. This can dampen the effects of a surface fire. Mesophyte leaf litter will be thinner, less abundant, exhibit less curling, and have lower lignin content, leading to increased decomposition and reduced fuel mass in the litter layer, further dampening the effect of fire. Answering these questions is essential to understanding future forest flammability as mesophytes begin to occupy the midstory and eventually replace oaks in the overstory. Will fire be an effective restoration tool, and at what point are these compositional shifts too labor-intensive to reverse? 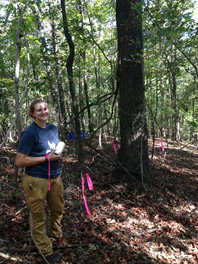 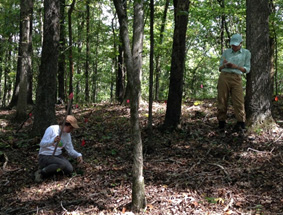 We are broadly interested in how fire season influences upland oak forests, the role of deer herbivory, and how vegetation influences forest flammability. At Spirit Hill Farm in northern Mississippi, we are implementing spring and summer prescribed fires and installing deer exclusion fences in upland hardwood stands with no recent fire history. Specific questions include

This research will inform management decisions related to fire timing and the role of fire in changing upland oak ecosystems.

Larch forests overlie 70% of Siberia’s permafrost and contain half the carbon in Eurasian boreal forests. Although larch is a fire-dependent species, our previous research and that of others suggests that increased fire activity may limit larch forest recovery and potentially trigger forest loss and a shift to alternative successional trajectories dominated by shrubs or grasses. Forest loss could have large consequences for climate feedbacks via changes in C storage and albedo. Larch forests occur across much of Arctic treeline in Siberia, and future larch recruitment dynamics will be a primary determinant of whether boreal forests respond to climate warming via treeline migration or retrogression.

Despite the global importance of these forests and the potential for an altered fire regime to modify recruitment patterns and future forest cover, larch forests of Eurasia remain largely understudied compared to boreal forests of North America. The myriad mechanisms governing post-fire larch recruitment and the consequences for system-level feedbacks to regional and global climate remain untested. This research will fill these knowledge gaps by linking constraints on larch forest recruitment after fire to system-wide observations of larch recruitment failure and associated feedbacks to climate. 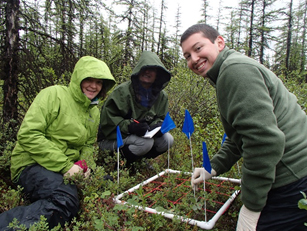 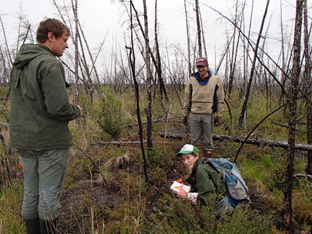 Fire activity is increasing across the boreal forest biome in conjunction with climate warming. Boreal forests store one of the world's largest and most vulnerable terrestrial carbon (C) pools in continuously frozen soils called permafrost. The potential release of C from permafrost soils can easily double the amount of CO2 currently found in the atmosphere and further exacerbate climate warming, increasing the need to understand how changing fire regimes will affect boreal forests.

The primary objective of this study is to determine how increased fire severity affects C cycling in Cajander larch (Larix cajanderi) forests of far northeastern Siberia. Cajander larch forests are a critical part of the global carbon cycle because they 1) grow over carbon and ice-rich 'yedoma' permafrost, 2) comprise a large portion of the boreal forest biome, yet are understudied compared to Western boreal forests, and 3) are deciduous conifers and likely differ ecologically from their Western evergreen counterparts.

We hypothesize that increased fire severity would increase consumption of the soil organic layer (SOL) that overlays mineral soils, increasing larch seed germination and establishment, and leading to dense forests at maturity. These denser forests will store more C in the trees themselves, but have lower understory C pools associated with reduced light availability, soil temperature, and thaw depth; however, this decrease in understory C will not offset the C gain in the trees. Finally, reduced light input to the forest floor will better preserve permafrost soils, keeping stored C from being lost to the atmosphere. 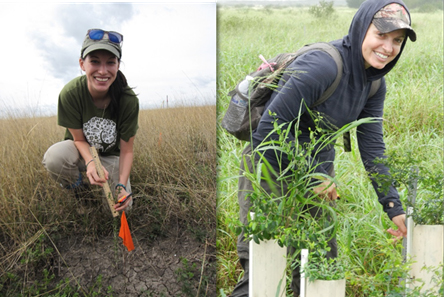 Tamaulipan thornscrub forests of south Texas and northeastern Mexico represent a diverse assemblage of ~50 woody plant species that have experienced substantial loss and fragmentation since the early to mid-1900s due to land conversion to pasture, agricultural development, and urbanization. These land use changes played a major role in wildlife population losses. Approximately 145 animal species use thornscrub forest habitat, and many of these are listed by the United States Fish and Wildlife Service (USFWS) as target species that require immediate protection. Most notably, the Federally-endangered ocelot (Leopardus pardalis), with ~30 individuals remaining in the U.S., relies on the dense thornscrub forests of south Texas as their only suitable habitat. However, land conversion has reduced thornscrub forests by greater than 95%, and stressors, including competition with invasive grasses, mammalian herbivory, and drought, threaten the success of restoration efforts.

We are assessing the effectiveness of multiple restoration treatments aimed at improving survival and growth of thornscrub forest seedlings planted in old agricultural fields. Overall, we have found that grass-specific herbicide most effectively increases seedling survival and basal diameter growth, whereas shelter tubes prove most useful for promoting height growth. Thus far, planting pre-prescribed fire and high density plantings have not been effective at improving seedling survival or growth. Understanding which restoration strategies most effectively alleviate stressors and promote survival and growth of revegetated thornscrub forest seedlings is imperative for implementing successful restoration practices.

Through a cooperative agreement between the US Fish and Wildlife Service Inventory and Monitoring Program and Mississippi State University, Rachel Arney wrote a national protocol framework for the inventory and monitoring of forested habitats in the southeastern United States. The goal was to produce standardized forest monitoring and inventory protocols across refuges to ensure robust and consistent data collection, and to support data comparability across studies and geographic areas. 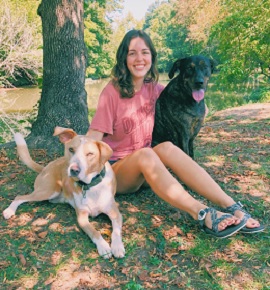